By the time I write this, I’ll have gone to Colorado Springs exactly one month ago. One month ago… I meant to write this earlier, but this beautiful, grotesque world decided to be cruel to me once more, yes? Hmhmhm…

I have never been to Colorado. My mental images of it were: forested mountains of mixed coniferous trees, skiing attractions. The city of Denver. That is all—I knew nothing else about the state, or its people. I did not expect for so much of the land to be open plains grazed by llamas. Just outside the Colorado Springs airport is a mule ranch, owned by a rancher who has been on that land for well over a dozen years rearing the animals. They are black, and beautiful—if mules had supermodels these are them—muscular, well-sheened creatures that I would be happy to marry.

The Colorado Territory had the potential to be a major battleground in the American Civil War, unbeknownst to many Americans today. The territory had its own gold and silver rush in the 1850s, vast mineral resources which the Confederates and Unionists alike sought to exploit in order to finance their war aims. Entire extended families and religious communities—Quakers, Latter-Day Saints, immigrants from myriad corners of Europe and Asia and the rest of the young republic—uprooted themselves and settled there in search of a fortune and land of their own. Colorado Confederates conspired and attempted terrorist sabotage of mining operations to disrupt the Union’s money flows, smuggled arms and materiel down to the Confederate Army in neighbouring Texas, served as spies and guides in the New Mexico and Texas territories, and openly brawled with the Unionists, in saloons, mining camps, in the streets. Half the miners were from southern states, and the territory was just marginally pro-Union; the “Bonnie Blue” secessionist flag was raised over the city of Denver and nearly sparked a riot when it was torn down by Unionists.

Ansel: I thought you said you knew nothing about the state…

Tolly: I just remembered the research I did on Latter-Day Saints in the area.

Iseul: Your boy is thirsty for mule cock

Tolly: As in Colorado, many of these religious communities were torn asunder by the Civil War—the Quakers were amongst the first to denounce slavery, but struggled to reconcile their tenets of pacifism with the violence necessary to abolish the wretched institution; the Latter-Day Saints were bitter for the US government’s military campaign against their establishment of theocratic governing bodies in the Utah Territory, and largely stayed out of the conflict.

Tolly: Oh yes. So what drew me to choose Colorado, specifically the city of Colorado Springs, as a vacation site, aside from the fact that passport renewal applications have only been recently been reopened and that there are heavy processing backlogs and a residual, subconscious memory of the state’s Civil War significance, was its geological splendour.

The city is home to the Garden of the Gods, spires and towers and walls of massive red sandstone, and the Cheyenne Mountain, the granite fortress that the US government has made the base of its NORAD Combat Operations Center. Directly west is the neighbouring town of Manitou Springs, host to ancient Puebloan cliff dwellings and the Cave of the Winds, a magnificent system of 3.2 of limestone passageways, seated at an elevation of 2,100 metres. And of course there is the famous Pikes Peak, one of the highest summits of the American Rockies: 4,302 metres.

Still very close by: 45 minutes to the south in Cañon City, the deep Royal Gorge and the Arkansas River which snakes through it; 45 minutes northwest, exceptionally preserved fossil deposits of the prehistoric Florissant Lake 34 million years ago; and 45 minutes to the east, the gelato layers of shale and clay and selenite and jasper of Paint Mines Interpretive Park.

Tolly read about Mormons in Denver in the mid 19th century for fun last year.

Those are the geological sites of interest of the area. Like the rest of the western United States, the city of Colorado Springs is largely a sprawl of highways, gas stations, roadside chain restaurants, and strip malls and their parking lots that impress on one’s eyes a cultural desert and architectural destitution. The older downtowns—of which there are multiple—are infinitely more walkable and accessible to human interaction and exploration. Landwise, Colorado Springs is actually 100 km2 larger than the city of Denver.

Two or three decades ago, Colorado Springs had still retained the atmosphere of a small town, according to the locals I spoke with. A decade ago, there were very many foxes—and very few city-native retailers or eateries, only the ubiquitous chains like McDonald’s and Starbucks and Chipotle and Wendy’s. Recently there has been an exodus of Denver residents, apparently: escaping the high cost of living, they have come down an hour to Colorado Springs, settled, and brought with them a demand for new housing and decent food. And it is not only Denver: seven out of every eight residents I met were not originally from the state of Colorado, but outside. Some were older retirees, but all were seeking jobs, and escaping the rising housing costs elsewhere…

And of course the needs of the numerous military installations—Fort Carson, Peterson Air Force Base, Schriever Air Force Base, United States Air Force Academy, the National Guard North Colorado Springs Readiness Center—to house their personnel are ever-growing… On-base housing is ever-in demand and scarce, so that many military personnel find themselves assigned to a room in the Wyndham hotel and others. Fort Carson is a city unto itself: it covers 555 km2 and spans into two other neighbouring counties to the south. A veteran showed me the little shabby homes with slides in front and chainlink fences around their yards:

There is nothing more American than the freedom to drive to a Jack-in-the-Box or to a Pizza Hut, your choice.

“Five kids? I don’t understand that. If you know you’re gonna leave for half the year, that’s mama alone with five kids—you better hope Jody steps up his dad game.”

“Heheh, Jody—that was my favorite cadence!” Military helicopters parked next to the preschool… And a high school just a block away.

Another resident: “The rest of Colorado kinda sees us, as the, you know, embarrassing, backwoods part of the state… We have a lot military here, so we’re the, you know, that cousin.” Unsophisticated and backwardly conservative was the implication; I had no idea. I was just here for the rocks.

The airport of Colorado Springs is jointly operated by the military; half of it is dedicated solely to military transports and such, and uniformed military personnel make up a substantial portion of the passengers, which I admit caught me by surprise.

When one hikes up the Cheyenne Mountain, one can hear the Army drills conducted below, across the freeway… We could not see what they were doing, obscured by hills, but Ansel stared across, in a strange way. And oh, he had such a time chatting up the “Joes” of the area… Very old and very young alike. I would say a third of the men we spoke with were military of some sort, either ex or current, and half the women had military family. Perhaps it was luck, but I swear, we were not looking for them.

I’ll have more to say about Colorado Springs soon. In the meantime, here are some photos I took on the trip.

Ansel: Tolly met a lot of locals. We may be social distancing, but that doesn’t stop the kid from chatting up people.

Tolly: Oh, please. You’re so much better at conversing with people than I.

Ansel: You had the jewellery and souvenir store employees eating out of your hand.

Click on the photos to view the full size. 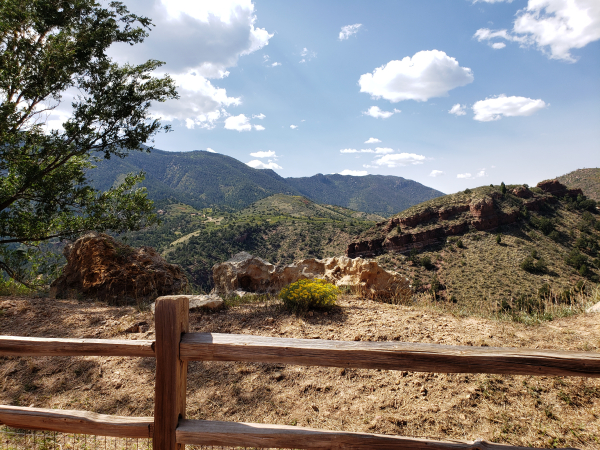 A view of the mountains from Cave of the Winds, Manitou Springs. 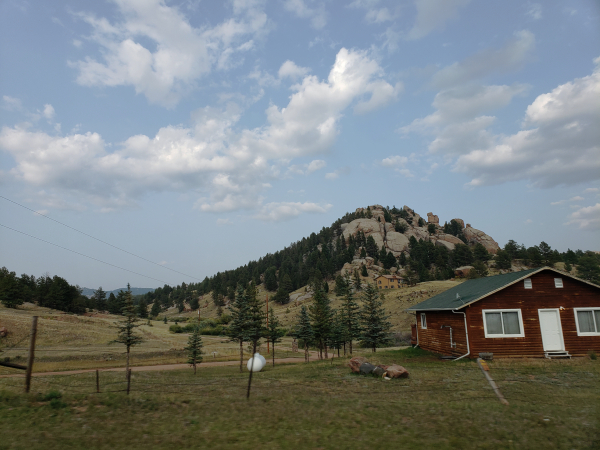 Outside of Colorado Springs, the town of Divide, Colorado, 45 minutes northwest. 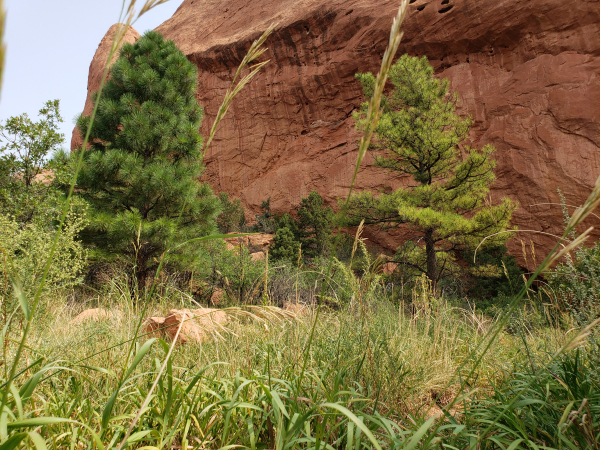 From the Garden of the Gods.
It is as if God himself placed the massive wall of stone there. 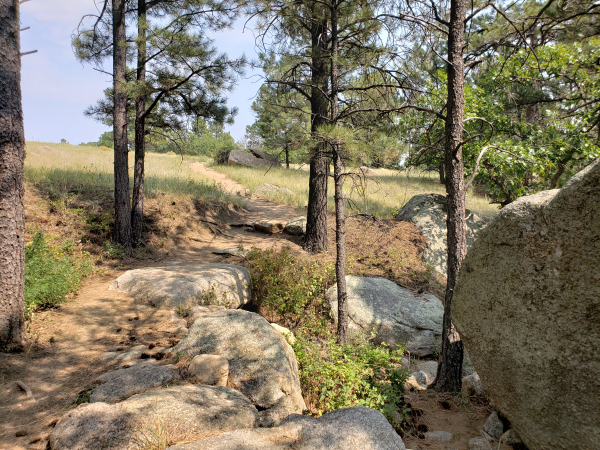 Hiking trail at the Cheyenne Mountain.
This part lends itself to mountain bikes. 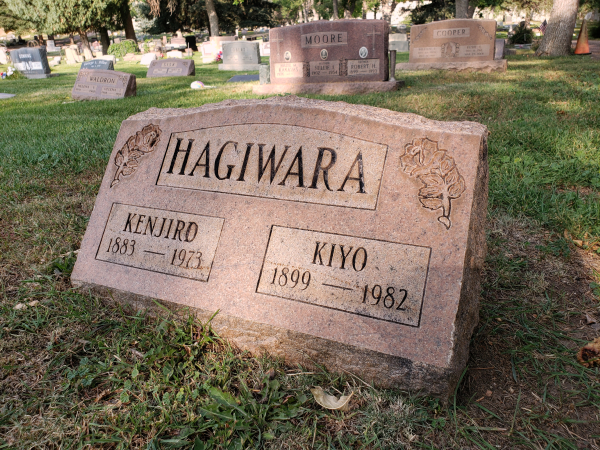 Fairview Cemetery, officially established in 1895.
This Japanese couple lived well past the age of 80. 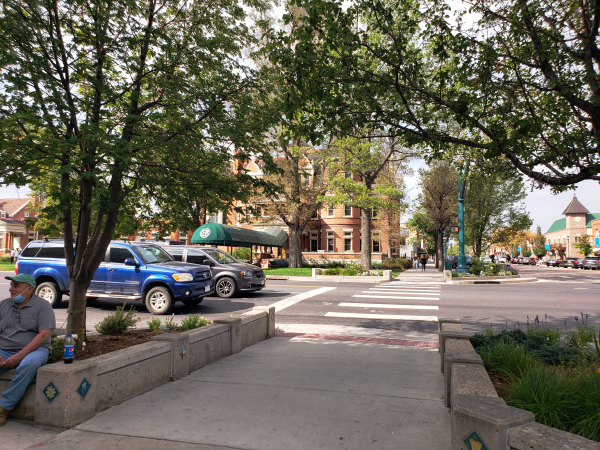