What man dresses like a yakuza and enters a metaphysical crystal shop? 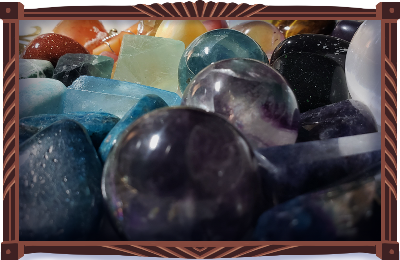 Cuz Yumeka was disappointed by the rocks he ordered online so Ansel saunters into a brick-and-mortar store to pick up some rocks for him… Typical Ansel thing to do. (It’s really surprising he didn’t get rocks for himself. Ansel loves geology.) He also steps in dressed like a freakin’ yakuza with his black and red camellia Cuban collar shirt, stone check waistcoat, slim-fit black dress pants and Giovanni’s scorpion collar necklace. Also a typical Ansel thing to do. But usually not when he’s alone. No I don’t count as a person to the jackass. I’m 78% sure he scared the girl at the cash register. But he chatted her up… easily, as usual.

And she honestly pegged him as someone experienced in practicing with and buying stuff like this! I can’t believe it, gawd, she needs to have her intuition checked. But he can smoothtalk anyone… He’s slippery like that.They talked about “kids” getting into crystals for the first time, (didn’t help that he could identify most of the rocks, too…) and even about tarots, though that wasn’t her specific field, and “They’re paying attention to the pips too, right? Not just the major arcana?” The man doesn’t even do tarot. He doesn’t believe in any of this. Yet somehow he can talk like he’s genuinely worried and into all that stuff…

The interesting thing about Ansel is that he doesn’t think any of this is lying. (He’s just like Giovanni in that regard…) He’s just “making the people around comfortable.” An honest duplicity is what Tolly calls it.

“They’re not… licking the selenite, right?” “No, none of that yet, thank goodness! But even if I tell them, ‘Don’t get this wet!’ they don’t listen, and take their crystals into the bath with them… And fluorite makes the water toxic.” And, “I can tell you’re not new to all of this.” He laughed… It’s not a mean laugh. Not a mocking laugh. It’s just. The same kind of innocent laugh, as usual, that Giovanni gives whenever the person he’s talking to is in a good mood from figuring out something.

Laughing like that. That’s not a typical Ansel thing to do. Ansel doesn’t laugh. Not unless he’s in love or wasted. That’s more of… Giovanni’s. …